In the 1950s the Spatzen family was developed by the Scheibe company. Nowadays a considerable number of owners are working hard to maintain their beloved gliders. In total some 650 Spatzen were probably made. In France they were produced under license and called «e;Fauconnet»e;. Currently six Spatzen are registered in Switzerland.

Four Spatzen owners met more or less by coincidence 25 years ago for the first Spatzen Meeting in Kempten (Germany). Through the present they have maintained friendly contact with many Spatzen owners throughout Europe. All previous meetings took place in Germany, with the exception of the 1992 meeting in Kortrijke (Belgium) and the 2005 meeting in Terlet (Netherlands).

Since 1988 Willi and Jürg Wälty, OSV members and probably the most active Swiss Spatzen owners with their L-Spatz 55, HB-737 (housed in Birrfeld), have taken part in all but two Spatzen meetings. The wish has often been expressed that the meeting take place in Switzerland.

After consulting with the managers of the airfield in Birrfeld, who reacted positively to the idea, the two decided to organize the 25th Anniversary Spatzen Meeting in 2008 in Birrfeld. Around the same time the 75th Anniversary of SG- Lenzburg was also scheduled to take place and so the Spatzen meeting was coordinated with the Lenzburg glider group´s FlyIn.

Following the announcement, registrations came in from Germany (9 Spatzen, 1 Fauconnet, 1 Kranich III and 1 Mosquito), Belgium (1 Spatz), Austria (1 Spatz) and France (2 Fauconnet). For years Marijke Waalkens from The Netherlands has been attending with her rather rare Doppelraab.

Arrival day. In order to create a ranking at the end of the Spatzen meeting (the winner must organize the meeting for the following year!) in the course of the following days different kinds of contests are held. This first evening the goal is to rack up as many points as possible on the bicycle obstacle course. All participants did their absolute best to place as highly as possible on the launch list for the following day, moving through the course with utmost grace and concentration. 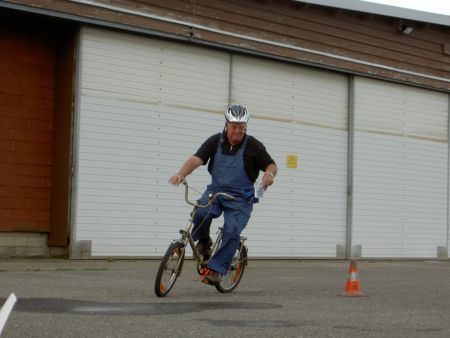 Afterwards all participants were invited to attend the launching of two new SG Lenzburg gliders.

The weather was cloudy, but some made the first rayon surveys from the Winde glider flown by Lenzburg members and identified that it would be possible to reach the necessary height with the Spatzen. That evening everyone enjoyed the dinner prepared sumptuously by our Lenzburg friends including soup with sparrow, served according to tradition in the special «e;gamelle»e; cover. In addition to the flying, the social element plays an important role at all Spatzen meetings.

The weather was not exactly ideal for assembling aircraft but one individual who was not willing to wait managed to get a two-hour flight in (Fauconnet F-CCLI).

A special experience awaited the participants on Wednesday with a demonstration of the glider launching method practiced in Switzerland with a bungee cord (usually performed in the mountains but in this case on a flat surface as a demonstration). With the help of assistants, the representative of the OSV-Schweiz organization, Willy Fahrni, set the rope up in Birrfeld and with the help of the Spatzen participants who helped retrieve the cord, the French Fauconnet was able to be perfectly launched four times with flights afterwards beyond the 300 m distance. For everyone present this was an impressive introduction to the original launching method for glider planes. 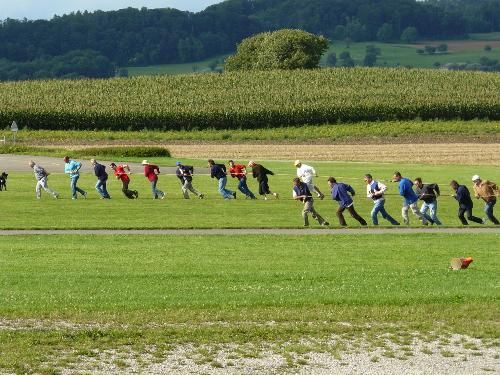 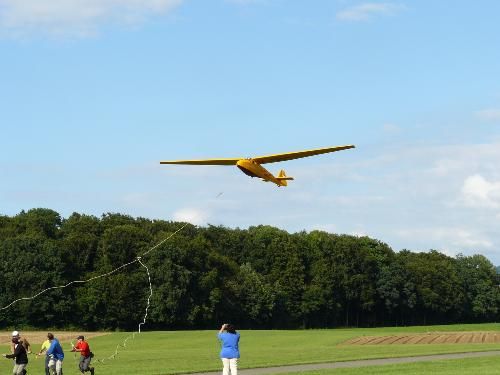 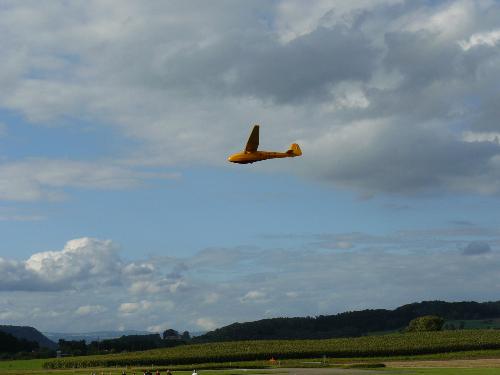 The best day of the week! By the time the briefing took place the flight director was already able to presage good conditions, which also materialized. All participants assembled their aircraft and a colorful flock of Spatzen brightened up the airfield, which otherwise looks quite white and lifeless. 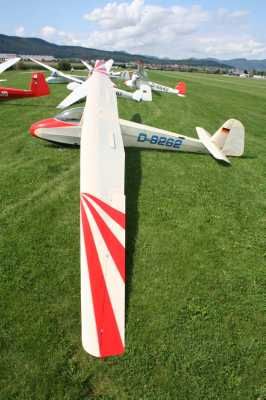 With 18 launches a total flight time of 39 hours was reached. The longest flight lasted 5:44 (D-8262) and the longest flight began in Birrfeld, continued to Bielersee and returned to Olten – 170 km in 3 hours – and all this from a Winde notabene (D-4697)! A clean landing at the target destination was achieved as well. 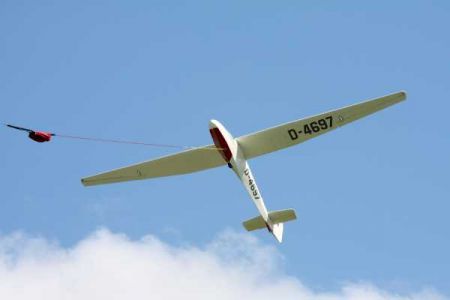 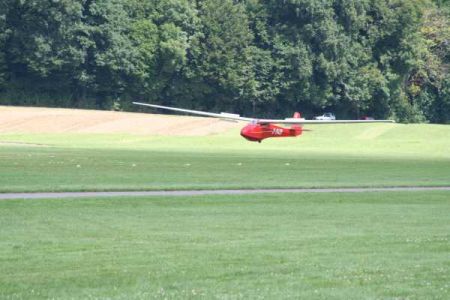 The weather report didn´t bode well for the day. As a result most participants went on various excursions both near and far – for example testing the waters in Schinznach, checking out Hallwilersee or visiting the Wohlen Straw Museum. 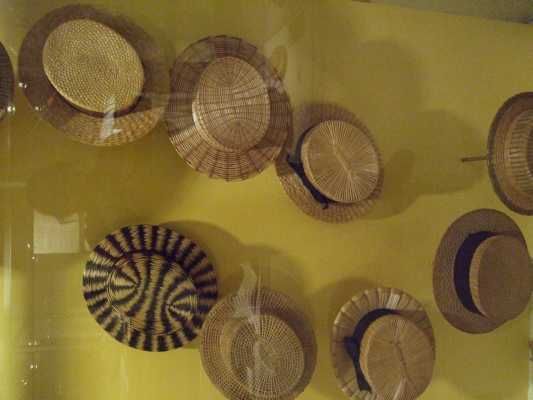 On the last evening the announcement of the final ranking was awaited with great impatience. Everyone was curious to know who would have to organize the next meeting. The two judges, Jürg and Willi, computed the results from the 3 categories: bicycle course, length of flight and successful reaching of destination. To resounding applause Alexander Jacobi was crowned the winner and he announced with great joy that he and Sabine Bergner would organize the 26th Spatzen meeting in 2009. The event will be held at the Biberbach airfield in Germany on the traditional Corpus Christi Sunday.

With the Apéro Flyout the successful event, which saw many a new friendship forged and many an old one rejuvenated, was brought to a conclusion and the participants, who were full of praise, headed in different directions towards their respective homes.